Since Their Award of the Nationals Stadium Contract in June 2007, the DC-Based Sign Company Has Continued to Position Itself as the Leading Full Service Sign Company in Washington, DC

Washington, DC (February 13, 2008)—Gelberg Signs today announced the award of seven major new contracts, all of which are located in or around the District of Columbia.

The DC-based sign company, family-owned with a local history dating back to 1941, is an active member of the Certified Business Enterprise (CBE) program within the District, which offers contract bidding opportunities to small, local and disadvantaged businesses. Many of Gelberg Signs’ new projects reinforce their commitment to serving the local market.

“Washington, D.C.’s focus on a CBE Program has allowed our business to grow exponentially within the District, and compete for projects that we may not have had a chance at winning previously,” said Guy Brami, principal of Gelberg Signs, along with his brothers Luc and Neil Brami. “Each new project that we receive is not only good for our growth, but is good for the local economy, as we place a great emphasis on hiring and working locally. This is something we’ve always been very proud of.”

The new contracts include:

“As Director of LSDBE Development for the D.C. Sports and Entertainment Commission, I believe that Gelberg Signs’ success is a terrific example of how the CBE program can help businesses in the District prosper in today’s competitive environment,” noted Courtland Cox. “By leveraging the resources and power of our local and small businesses, we can continue to build our community and bring economic prosperity to D.C.’s businesses and residents.”

Among the nine new hires, seven are graduates of Covenant House Washington, a non-profit organization that addresses widespread problems of homelessness and poverty among teenagers and young adults within the District. The principals of Gelberg Signs have been recruiting from Covenant House Washington since late 2007, when they saw an opportunity to offer valuable a career opportunity to young adults exiting the program.

As a result of Gelberg Signs’ many new projects, and its continued work on thousands of signs for the new National Stadium, the company expects it will continue to hire individuals from the Covenant House program, as well as other qualified individuals throughout the District, in the coming months.

“The power of working and hiring local should never be underestimated, and we are committed to keeping business—and creating career opportunities— within the District,” added Brami. 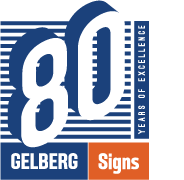 Gelberg is proud to be celebrating 80 years of success, and hope you join us for 80 more years moving forward.
Learn More

We are a certified business enterprise